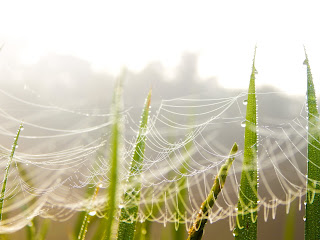 My thoughts drift back to when I was a child. I had a little toy kitchen sink and stove, no nouveau riche set, à la pottery barn, but very basic and snap together. It was set up in the unfinished basement on top of orange Muppet shag rugs that covered some of the cold concrete. There was a giant TV that looked like it had been built in a giant dresser. One top of its console lifted to play vinyl records and the other to play LP’s. Look it up.

My kitchen was set up in the corner by the window well, where I could see cobwebs and spiders filtering the outside light shining through.

I don’t remember playing much as a kid, but I do remember cleaning up the toys stored in giant Tang cans down there--organizing and reorganizing them at my mom's bidding, to rest the perfectly sorted toys in glowing metallic green cylinders, on pastel yellow metal shelves, the quiet yellow that sort of softened the Muppet rug domination, but added a utilitarian feel to the unfinished basement. I should mention that the rest of the upstairs was almost museum quality in cleanliness, orderliness, and fresh beauty, so, this basement felt like a stark contrast to what was above ground.

We used to roller skate around the stairs in a circle, over and over. There was one half of the basement that was unused and piled with boxes and boxes of never touched or opened stuff and random pieces dropped there. There was also a long storage room that we called the 'fruit room' that housed canned peaches and sometimes alien green mint jelly that I loved to put on my peanut butter sandwiches. A visit to this room always had my heart beating as fast as if I were in a Halloween haunt. That room, adjacent to the stairs, had us climbing the stairs in 4 steps instead of 16.

I remember a sunny summer late afternoon, finding my way down to play in the kitchen, something which was actually very rare for me. It may have been one of a handful of times I played in it, if I am remembering correctly. My mom let me take a banana down into the basement and mash it up in my toy kitchen dishes. This was a first and a last. My mom was a food-in-the-real-kind-of-kitchen-person. I remember how excited I was to get to use real food in my toy kitchen, because honestly, the fake food never felt all that satisfying. It was a sweet treat, and it brought magic to my little girl world.

I want to remind myself of this, when I want to eat another cookie: there is a reason that sweets are directly linked with magical lands, and sweet surprises. Why do we fight the fact that sweets help us get through the mundane of life, and make the good better? It is just pure fact.

There is just something about those long stairs to the basement and my time down there that is very memorable, and important feeling for some reason, as if a lot of my development as a person happened down there outside of the very heavily scripted beauty of the upstairs.

I was more a part of what was unfinished, full of potential, and clogged up with a lot of useless stuff-seeing the light filtered through a web of possibility, but never seeing clearly what it lit up. Perhaps it is because I felt a sense of independence in the basement, a little bit of fear of the dark, and a little curiosity about why this living space ended up being unfinished and unused. (It was later finished when I moved out).

I want to remind myself that the unfinished is mesmerizing, that walking down into a basement can bring me in touch with my subconscious, and the oddity of this human journey, that play can happen around heaps of useless things,  including mammoth sized appliances, fun can be had without drywall, and art can be made from walls exposing their innards-- snaking wires and asymmetrical wood framing and the occasional wonky pink insulation untucked and untamed. I also want to remind myself that a treat can be guiltless and a view of light through a spider web can evoke decades later the same fuzzy awareness of something I’m trying to understand, but that always seems beyond my grasp.

What I most struggle with in creative writing is that there are some ideas that just feel like they belong in the ether, in the natural born clouds. They aren’t meant to be pinned down, and every time I try to pin them down into a practical form on a page, I wound them a little bit, and must throw them back up into the ether for repair, to restore their more nebulous characteristics. This content isn’t supposed to have legs and weight, and to make noise when it walks, or to have such things as a name and defining characteristics. Rather, just whiffs of possibility that hint at an undercurrent of parallel worlds so vast and amazing as to put any Tolkien or Rowling to shame. Its just supposed to hang there, ripe for plucking, but the plucker beware. The fruit bruises easily.

And yet, there are those books that seem to pin down something that doesn’t maim the central cast of characters, and in fact broadens the material into something that changes al…
2 comments
Read more

I’m standing on a cliff overlooking the water’s edge. The sky is present, hanging there in its vastness, holding this moment with symphonic strains of gray and electric buzz. Watching, suspended, sensing.

I see to both sides of me vast white cliffs carved out by relentless grasping of the ocean extending down the coastline.

The earth where I am standing up above gives just the right yield and welcome, with its soft grass and dainty yellow flowers, falsely giving the impression of delicacy, when anyone can see that they are hardy to withstand the harshness of forces here.

There is an undeniable tightness of gravity here, pinning me down, tugging at me, slowing down my step. I feel as if this force could just sweep me away with the littlest of a flick, like an ant off the table. It screams danger while it beckons.

My life had been recently taking on new grander design dimensions when this place and I met. Dating a new man, after being a single mom for…
1 comment
Read more