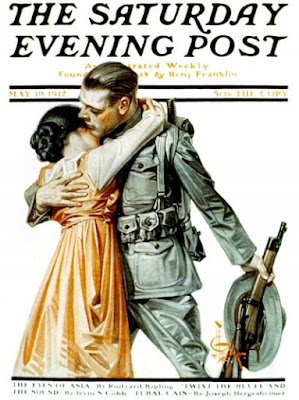 
I wrote them another letter today. They are getting simpler and simpler. I've got it down to a few sentences now. It isn't that my heart isn't in it. It's just that something tells me that they don't open my letters anymore.
You've been gone for so long now...
Well, le'ts not focus on that. Perhaps you'd appreciate hearing the simplicity of the letter I sent them. I know you always found me a little over the top--perhaps even a little melodramatic. So, listen to the efficiency in this!
Dear Sirs, and perhaps a Madam or two,
I am writing you to find out if you have any information pertaining to my missing soldier. He's been reported M.I.A. for sometime now. Realistically, is there any hope that he's coming back? And if it isn't in the cards, how do I even begin to go on, after. all. this. time.
And just so I know, and can help you spread the word like a good citizen, do you know when this war will end? If you don't have an exact date, could you give me the month--even the year? Ballpark figure would be just fine.
Sincerely,
Me
Good, isn't it? Can you feel a little semblance of the acceptance of my fate. Isn't that great? I liked the part about being a good citizen. I think that could get my letter a second glance, don't you? I get the sense that these men in power like to help us ladies do good. Well, we all have to do our part. It's war, you know, and we all have to sacrifice. We all have to accept that there will be casualties. Apparently, it's supposed to be quite natural.
Why all these letters to you, written on the wind, with no destination? No more deliverable than letters to the North Pole?

Yes, I know it's silly.
Well, here's the thing--'cause it still feels like just yesterday, that in your eyes, I saw another world, when your touch brought me home, when it felt like someone finally turned on the lights.
And then you were gone to fight for peace.

And you were gone.
I can't stay angry, not when I know that you never had a choice, but to go and fight. What else could you do? How could you live with yourself any other way? And getting lost out there, well, it was a risk.
I want to let you know that you are in good company here, as I have discovered a whole lot of people missing in action, the only difference between you and them, is that they never left home. That's right. They didn't even have to go to war!
Seems war or not, you find yourself buried in the trenches, in eternal wandering, even left for dead. I dare say that actual war is just the playing out of what we are all cursed with deep down in the first place!
Yup, I've learned a thing or two. Nobody escapes war, and I mean nobody.
I'll tell you this too. It just might be easier to have the blasts and the high adrenaline combat missions, than to be left at home, where the explosions are much more subtle, but just as dangerous, where it is easier to be right there and missing all at the same time. In all truth, I think we become missing in action long before you do. Not to mention all the quiet. And we can't justify the tricks you take for granted for dispersing tensions--no dirty jokes, naked boobies, or heroic pens burning with the saliency of long distant love, sent to sure-fire destinations.
Instead each moment is heavy laden with words that might never be exchanged, especially the urgent ones scribbled madly in a letter and delivered to the post, while, rather unsuccessfully, suppressing the vision of a slow motion blast blowing the letter right out of your hands, just as you've torn a corner.

But you act natural as you give the postman tender for your postage. You tip with a friendly smile, because everything is just fine, and it is up to you to be the frosting on a Styrofoam disk that passes for a cake.

You walk home right past the reminders of life experiences unrealized, and watch years pass in a holding pattern-- keeping you grasping for a potency that is clearly lighting up the city, but that has left you in the dark. And yet, everything looks exactly the same, feels the same, has the same markers. Sometimes I think that we all secretly want to burn it all down, so, that we can find a reason for it to feel so differently, when everything is so exactly the same.
Well, the good news is that I know our poet souls. I know that whatever blasts, embedded shrapnel, terrifying runs for cover that we are experiencing literally or figuratively, or, any journey back home that we may be on, whether to the here or beyond-- that there are moments where we find ourselves out of the fire, in that happy place, sitting on a soft grassy knoll and leaning up against a big leafy green tree-- words spinning themselves together faster than we can pen them, their golden elixir leaving a path of radiance, as the words are digested by something greater within us that we have only come to know, by extracting the sweet nectar from all of our experiences, even the war.