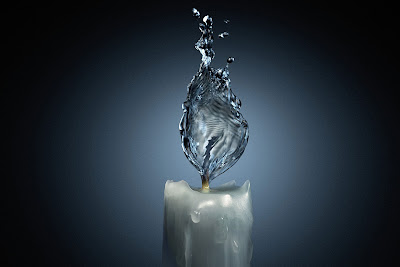 The urge to clear, move, and purge is very strong right now. I've finally decided that I am worth it, to create beauty and flow in my life all over the place! This in itself is so new. I'm pushing myself to do more. I am holding myself accountable.

And yet, I am understanding that leaning too far this way just becomes another vice grip of wanting control that dams the flow just as leaning too far into allowing yourself to do nothing begins to lose vitality.

In this control mind, there is a want to fix and rearrange and clear, and there is an angry and judgmental energy that wants to get up and push people and things out of the way to get it done. It resists the flow, pushing the ability to allow the flow into some unnamed moment in the future, when the path is spic and span.

This morning I felt restricted choosing my clothes, feeling ready to bag them all away for charity, and run out to buy new ones, because I deserved to feel good, dammit! But simultaneously, I could fast forward into the future, when the novelty of the clothes wore off, and knew that any feeling of release would be so fleeting.

Yet, I wanted to do something about it! How did I know if I should bag and go, or just accept?! I didn't want to sit down and cry about my constriction, which made me want to take action, but I didn't want to become a monster that wasn't available to life until everything was perfect. I didn't want to give into an energy that preyed on the weak. I knew I needed balance.

I couldn't suppress my story down and just forget it. The story had to be honored. Something very quiet whispered that there was a gem hidden somewhere, and it was worth exploring.

I sat down to write out what was going on for myself in a notebook, because actually having to form the words on paper, slows down for me the energy of MUST CONQUER THIS NOW!

I realized as I began writing that there was a whole running list in my head of things and situations that needed to be changed, rearranged, renovated, and made-over NOW!


If I rush and growl, and stomp, I feel strong, but I create pain. And when the stomping is over, I wonder why I let it possess me. When I do war to get what I want, I sit down, and there is no satisfaction. There is still loss. I move to the next problem, because I am focused on fixing. I am just playing out an energy of continuous and ultimate devastation. I get trapped, until I return to my senses.


I don't want to keep looping in this cycle.


Yet, there is a desire for movement forward. How do I differentiate between creating beauty that brings lasting peace, and following powerful urges for change and clarity?


When do I know when to fix, and when to accept?


And as the pen often does, it began to answer.


TURN IT OVER. Let in the flow. Allow an unfolding energy. Use your big imaginary scissors to cut yourself from cord that connects you to this constriction, to this old pattern, and see what clarity rushes in. Let the falling in love energy return. Join the moment in joy and move from that space. Break down the walls of your control, and let something else eddy within you, pooling in your heart center.


The peace that settles within you in this quiet release is real. It doesn't come from a manic energy of having conquered, that requires problems traveling down the conveyor belt at breakneck speed,  keeping you in constricted patterns of shutting out life until problems are solved, as even when they are solved, the moment of resolution is short lived, as another problem steps in from the endless line of them.


Living fully is not going down road after road, chasing after something.


Living fully is running through a finish line because each step feels good and right and part of something bigger, but not because you need to prove your self-worth.


Living fully and clearly is not buying into the illusion, which puts you into a mode of being a machine, disconnected, and forever working to get results, forever shutting out life-force.


Living fully is settling into the journey as the destination, instead of running behind the gingergread genie that taunts, 'catch me if you can and you can have it all!'


I felt the walls coming down. I recognized this, as true release in my heart and power center, when the flow returned, I felt a rush of love for all. I felt held and supported. I began to fall in love again. I looked around and everything had the potential for magic and light.

The need to flee, purge, clear and avoid, melted away, and in its place rose up so much gratitude.

I found the right clothes, and I could hear their story, all they'd lived through with me. I knew they'd be happy to move on in time, and that something fresh would be welcomed, at the perfect time.

As I played, I realized how invisible my children had been to me this weekend, as I held the stance of needing to conquer their chaotic child energy. I saw how I had been avoiding and shutting out my softness, as their messes and noise became mountains.

But in the release, I knew I'd see them again--that I'd see my whole big beautiful world again, because I could see it now, and it was so easy to return to the heart. And that is what I am most worthy of. That is what I truly desire.

And each joyful step will bring its own transformation of my life, but will not be limited to a Photoshopped and squeaky clean version of it.