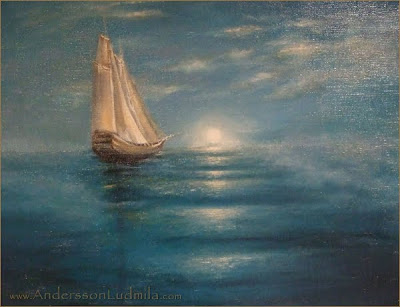 Yesterday I found some old love letters. I began reading through them, digging through like a box of chocolate, for the delectable morsels--

sure enough, as with all lovelies, the pleasure transformed slowly, imperceptibly, until it was too late, into a deep ache in the gut.

These loves immortalized in words have long since become a thing of the past.

I wonder why I've held onto them all these years, and certainly for the past three years that I've been divorced.

Ah, the power of a love letter, to fill the sails of a ship and keep it steady, even with large gaping holes in the hull. Riding the dream.

I see now, that in each case, it was best to let the ship go down, to put it out of its misery. To show myself how apt I was at swimming to shore, scouting new lands, exploring new possibilities.

Yet, I haven't been able to let these letters go. Almost as if burying them might invalidate that the love was ever there.

The letters stir powerful emotions. The poetry and pizzazz, perhaps proof in the moments they were tendered, that I was experiencing something that I didn't think I could live without.

All to create the perfect illusion of the love story. I could let a lot slide under that hallowed banner.

Appearance of a love story, would be more correct.

It got me thinking, how in all my relationships, we were living on a dream and the dream was fed by the 'trek west', by the struggle, by the attempt to live it fully, when we had no idea what we were doing. Hmm, that's odd. Kind of like my relationship with life.

I think underneath the surface, the dream was empty and cruel for all concerned. The Emperor without his clothes parading around, hoping no one would call his bluff.

Hmmm, this is not like my life now. Because relationships now have shifted, so that the underneath feels full and precious, and connected to something truly alive and breathing. So the appearance relationships were pointers to possibility. My soul must have been able to detect the difference. Knew it. Knew it was time to stop forcing, pretending, controlling. Knew it was time to let go, because the appearance of love would be nothing in comparison to the actual thing. Just a symbol of it.

I find this worth examining, mostly because of how emotionally affected I was by revisiting these letters, how parts of me rose up in pain, wondering how such love professed, with such poetry, could have had such short shelf-life in some cases, in some, a little bit longer. Yet, in the end...the end.

What I know is this. Our dreams together, were dreams to be honored and cherished, and that there was a newborn love there--only it was destined, like anything newborn, to grow up, to develop, and to mature into something that would be the sum of its experiences and heart.

What I am learning that is important to me at the moment, is that it was never about all those expectations being realized, in those fancy dreams. It was never about using another to deflect your shit. Even though we used one another this way. And yet it was something special--but ever just the beginning.

The words birthed from the deep, in our love letters to one another, were merely proof of our own souls wanting to birth inner landscapes, be it by earthquake, volcano, or flood--to curve and shape every last contour to blessing--and if we needed to use each other as stepping stones or security blankets for a while, it was what was right at the time.

I am learning, however, that you don't stop at the dream. The dream is small. This is just the spring board. It is just a pointer, a symbol.

We are heading toward what is beyond that. It entails actually letting in the love that is professed, and receiving it too. So that when the newborn light fades (which is inevitable for us romantics), another kind of light takes its place, rich with the uncovering of truth, and the momentum for release and rebirth.

It is about letting go to let in a love that wasn't previously on the platter. Opening a grand space, that would have been previously filled with booby traps and raging monsters ready to devour.

What wants to be expressed through the energy around this is an acceptance of all of it, how there is no regret. All of it has been necessary. The reaching, the holding, the grasping, and the eventual slipping through fingers--all of this wants to be mourned as a literal death. The endings that were never conceived of in the beginning. The deaths that remains in your being, because whatever they are now, they were once alive.

Then it wants to be laid to rest.

It isn't quite so easy to let it go, though, is it? Just spiral around and run into it(or from it) from time to time, if lucky, experience it in another frame of mind.

I am torn between wanting to burn them and release them into the ether, and wanting to hold them close as proof that I was loved, even if it was mostly from those quiet moments, where men sat in the dark, with a pen and a dream, and that dream somehow contained me, and I was all of it and more-- until he actually woke up next to me.

What I want more than anything is to see the truth. I no longer want to use anyone or anything to deflect my image, and keep me from seeing myself.

Yet, one value system, so deeply conditioned within us, and so gigantic in all experience, (largely because it is so heavily responsive in our bodies), does not beget another.

What this post is really about, I guess--because actually, I'm not quite sure myself, is about the powerful vacuum that would be created by letting go of wanting something outside of ourselves, that monstrous space that truly keeps us tethered to the wanting, eternally.

And how the releasing of this, the gradual prying off of hands, through the grace of experience that shows us the way, creates an infinite space for a whole new way to emerge.

Is this why I found the letters? Is it possible that they symbolize more than just lost love, but a means of finding it?

So burn the letters, let go of the old, onto the new? Time will tell.

Why is it in this moment, I feel like there should be some kind of hauntingly beautiful earthly mentor or guide, with long silver hair, who knows all about this. She, who would take my willing hand, and lead me out into a meadow peppered with wild flowers glowing in the light of the moon. She, who would direct my gaze up, up, and up, into the night sky, and then help me light the flame. Speak some kind of incantation--meeting the death of poetry with more poetry--celebrating that in letting go, I am retrieving a part of my soul, back to me.

And after, in the light of day, I'd find myself softer, more open, certainly quieter--because somehow the darkness was fed what it was hungry for, and left me hungering no more.