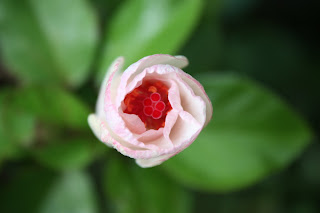 I don't quite know how to write about what is happening in my life. I have such a sense that the being that is hopping out of bed, doing daily tasks, completing projects, feeling enthusiastic about my kids, isn't me--or at least familiar to the me of the last 36 years.

I don't know how I am doing it all, and mostly I can't understand how engaged and joyful I feel in everything--how close my heart feels to the surface--but how balanced it feels. Not extreme blissed-out highs, but not god-awful lows either. Somewhere in the middle.

I notice that this place on the continuum is where I  want to return, and more and more I do. I seem to be hoovering around a mid-point. It feels quiet and stable and clear. It asks nothing and wants nothing, but does not impede doing, intuiting or feeling immense joy and appreciation--perhaps the best way to describe it is that it isn't so fleeting or so much like a roller coaster.

Something very heavy I've been carrying all my life has been put down, although I can't quite pinpoint how or why or when it went away. Gradually, perhaps.

I have the sense that my soul has its very own special recipe it has been following--throw in a dash of this and that, a little more contrast, a little less, here's a breather, here's where you make a run for it--stirr it all around, and then cook it. Time to take it out and see what we've made.

I realize that my entire life I have been weighed down by a dark cloud of depression, fear, hopelessness, and despair. But because it was my normal, I am just realizing to what extent was the intensity I lived under.

And somehow, it isn't there now--and I'm not on medication.

I've felt tentative about writing about this, because I've had many a breakthrough only to find myself back in the darkness.

Nope, it is centered around some kind of mid-point.

My mind has a hard time making sense of the fact that my body chemistry seems to be inexplicably altered. I think my mind thought that the concept of 'mind over matter' was a nice idea, and the fact that all this work might actually have made a dent--pushed me through to the other side--well, it can't quite grasp it. I don't think the mind was really ever open to sanity as a real possibility.

It was like my suffering brought me to the brink.

I would say that I reached a point where I sincerely released aspects of self-importance in this world. Got to a place where I understood that it really didn't matter if I lived or died. Everyone would be okay if I was gone.

I would be okay if I was gone.

And I think for weeks, I powered down, having completely lost any excitement for living, but also having lost any hatred for it. I lost my victim role in that. I powered down not in a pathetic save me kind of way--but in a neutral way, where I understood that none of it mattered. Whether I lived or died, truly didn't matter.

It didn't feel selfish or shocking to me, that a mother of two girls could feel this way, because it didn't shock me that I could see my girls as okay without me. It felt true. I saw their insignificance too.  I also saw their power. But it had nothing to do with the kind of power I had once thought saved the day. And neither the power or insignificance scared me or kept me clinging to it.

I believe parts of me have been dying all along. But maybe this time, I truly let something die.

Maybe what died was all that heaviness and pain, the mind frame that supported disillusionment and fear, made the world into a monster that showed no real promise for peace.

Maybe what died too was its happy cousin, that exalted life to the sacred, that cherished earthly existence as the land where the soul could spin a thousand dreams, could touch, feel and hold enlightenment, belonging, and oneness, in the bottom of a fleshy palm.

Maybe they both needed to die.

Because now, something is different. The world looks the same, but different. It's all not such a big deal, which equals ease of participation.

And in participating, there is quiet. There is seeing without having to squint through thick veils of stories, fears, limitations-- or on the flip side, extreme highs, synchronicities and rampant possibilities, to see what is really there. It is like all that stuff is getting filtered by a big fat, SO WHAT!

The rest seems to be falling under the heading Yeah, Big Deal. Doesn't matter.

And for the first time, there are actual moments when I forget I was ever searching for anything at all.

In moments, I got lost in what I am doing, and realize that the commentary in my mind is not running away with me.