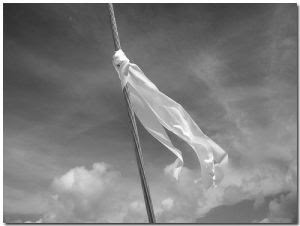 Okay, so here I am, being spit out.

I think the hold of darkness lessened when I decided to match my fear with a little bravery, which was really just doing something I was a little less afraid of--airing my vulnerability here--knowing that I would be met with love.

Can you even call that bravery?

That's the exact kind of thinking that got me into this mess.

Maybe it was as simple as reaching out for help. No shame in that, is there?

I'm done doing this on my own. I've proven to myself time and time again, that I cannot take on my monsters without mighty companions by my side.

Healing separation does not come from remaining separate--but why do we so often choose to remain separate, until we can pretend better?

Something clearly wants to break this thought system apart, and oh, how I welcome it.

The army I'm leading is an army of ghosts. They never existed, because they never had to.

Thank you for all of your showerings of love. By the end of the day, your comments and emails began to actually penetrate a thick wall of darkness that had become my experience.

But there was a stark realization that no one could really pick me up and carry me the rest of the way--at least a significant part of me would never allow it.

Seems that I am looking more for a mid-wife--just someone who is still in awe of the process, but who isn't afraid because they've seen it happen over and over. Someone who can ride the contractions with me, but not be overtaken by them--but will be okay if I am for a while.

Yes, I believe that I have to do the hard labor on my own. Going to have to look at that.

I have to admit, I'm not sure what I am birthing anymore, or why I must keep myself in a perpetual birthing process.

So, what do you do when you realize that what you can see, what seemed special and unique to your vision, the source of the advice you held and shared as truth, that just might hold the answers to freedom, to unraveling, to peace--when you find all of it exists as another set of finites to fuel just another crusade, within a reality that isn't finite.

What I've construed doesn't really matter, does it? Because in each new moment there is the infinite, and it can't be pinned down.

I begin to understand why the Romantics were so suicidal, why so many went mad, or were on the verge of it. Imagine being able to hear, or worse, being the actual conduit for the most hauntingly beautiful melodies to spring forth, and finding yourself completely unable to translate them into experience. And then to not be able to catch and hold your creations, the only hope of their existence dependent on a mostly non-feeling world, as performance, as prized exhibits to feed a competitive vein, destined to become subjects of scrutiny, picked apart until you could no longer hear the music.

All of the beauty continually up against a mind that requires that we label, that we limit, that we evaluate, that we explain.

It seems the feeling place is always fleeting, internally or externally.

I mean, I found the light living outside of a grotesque embrace called vampire and saint, but in the end it didn't matter much that my mind could shout victory! because the realization was only for that moment--for that present moment. It didn't really fit later, because the feeling was gone. The memory of it could not be translated, nor explained, because in the moment of receiving, it was a melody that had sung to me. It was the light-- but you can't catch the light and hold it. You'd only be chasing it later, trying to recreate the melody.

But a chasing mind does not create melody.

Winning is just for a moment. It doesn't matter shortly after. Even if you string the winnings along, there is now something to keep up to, chase after. Something that chases you.

So, my discovery wasn't really something that could be carried down the road, as reserves for later.

So, what I feel more prominently in my experience these days, after the epiphanies have faded, is a distinct desire to turn off the engine, to shut down the entire operation.

But part of me is afraid of this place, because it feels like the surrender is so final. To really admit that there is no fight left in me? Isn't this just death? Isn't this eternal slumber? And what if I am still living? What would that look like?

Yet, I listen, even if I have my doubts that something can be birthed out of nothing.

Something in me recognizes that it has never been, nor will it ever be about searching down every dead end road for the final answer, for some holy grail that holds all the secrets.

Maybe the search is over.

But can I relax enough, let go enough, to ever let it show me the way?

I guess only time will tell.

But maybe it is as easy as perking up an ear, and listening to the music, feeling into it, and being okay that you'll never pinpoint exactly where it comes from, or what it has to say, or that you'll never succeed at holding it in your hand.