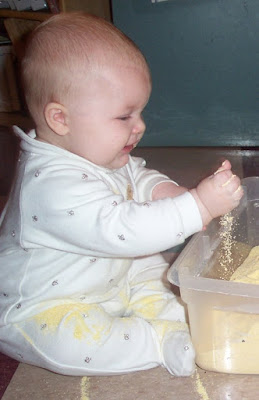 I want to say that finding innocence is the best kind of treasure hunt.

I want to say that when my girls were screaming and giggling in the bathroom the other night, and it was really hurting my ears, when they were wobbling this way and that, with their slippery, wet bodies, while I was struggling to keep them still enough to get through their tangles, that I caught sight of them in the mirror, and really saw them, and then the darnedest thing happened!--I started laughing too, and then it became like a really good concert, where I liked it loud.

I want to say that Christmas Eve this year didn't suck like last year-- that it was beyond awesome-- even though my daughters spent the night waiting for Santa with their dad. I want to say that I milked every moment of time I had with them that day for all it was worth. And the best were the surprises, like when my daughters and I decided to grab some Christmas music, and head to the nearest nursing home to spread Christmas cheer, and that just by chance all the residents were seated in the dining hall being served lunch, and just by chance there was a piano right there waiting for us!

I want to say that the residents ooohed and ahhhed over my girls rendition of Rudolph the Red Nose Reindeer and their sparkly Christmas dresses. My favorite was hearing all of them sing along to the carols, especially, 'Oh Holy Night', and 'Silent Night'. Maybe because, for the first time, I really understood what was Holy, and what Silent felt like. My favorite was how my daughters were so enthusiastic the entire time, and, surprisingly, I love how I kept having to push my five-year-old out of the way of my hands, so I could move them freely on the keyboard, but how she just kept coming back like a yo-yo and getting in the way.

I want to say that every day I understand just a little bit better, why this and that happens, what it has to teach me, and how it really doesn't take as much courage as I would have thought, to just be me, to do what I need to do for me, and to let go of needing to apologize for that.

I want to say that I am less afraid of being burned at the stake, or buried alive--that I think I could find a part of me that could be okay--okay, maybe just in theory? but there is a part of me much more able to accept what is, no matter what it is.

I want to say that my littlest daughter is no longer afraid of the blue tiles on the bottom of the pool, and to see and feel her freedom and courage to work through her fear, is to see and feel the possibilities all over again.

I want to say that my new holiday after the holidays was a hit. The three of us lit a three-wick'd candle to represent each of us, and shared our memories. Then we blew the flames out to symbolize the season ending. We lit the wicks anew after we shared our wishes for the new year. We danced to happy sounds of Connick Jr., and it has never felt so effortless to put the past to bed.

I want to say to all those I ever loved, that it was just a drop in the bucket compared to how I could love you now.

I want to say that I am wearing a very colorful hat, and that I am thinking of dying my hair red.

I want to say that I am working on loving our hamster, who has the audacity to be nocturnal, and who bites hard.

I want to say that I love people who just can't stay in the box, and who shift entire climates of being and future generation out-of-the-boxers. I love Beethoven because he was angry and had wild hair, and was messed up by his alcoholic father, and who just couldn't help from letting his fiery emotions bleed into his music. I love Allen Ginsberg for the same inability to stay out of his creations, (great movie about him 'Howl' is playing), and also because he saw through to the Soul-- even Moloch's. I love that I can love Wagner's vision, even if he was anti-Semitic. I love that I no longer have to protect the Jews, or anyone from being victim. I love that this makes me have less the need to be a victim too.

Yes, I want to say that I am letting go of what I have termed my victim proof, that I am carrying less and less of it around these days, wearing less the sign of a martyr. I love that my compassion is tending toward empowering the victim, vs. keeping them paralyzed.

I want to say that my house was clean yesterday, and looks like a bomb went off today, and that I am good with it.

I want to say that it feels good to write this way tonight, and to know that in the morning, when I question what the hell it was that I put up on my blog, I'll likely respond, oh well.

January 10, 2019
My thoughts drift back to when I was a child. I had a little toy kitchen sink and stove, no nouveau riche set, à la pottery barn, but very basic and snap together. It was set up in the unfinished basement on top of orange Muppet shag rugs that covered some of the cold concrete. There was a giant TV that looked like it had been built in a giant dresser. One top of its console lifted to play vinyl records and the other to play LP’s. Look it up. My kitchen was set up in the corner by the window well, where I could see cobwebs and spiders filtering the outside light shining through. I don’t remember playing much as a kid, but I do remember cleaning up the toys stored in giant Tang cans down there--organizing and reorganizing them at my mom's bidding, to rest the perfectly sorted toys in glowing metallic green cylinders, on pastel yellow metal shelves, the quiet yellow that sort of softened the Muppet rug domination, but added a utilitarian feel to the unfinished basement. I shoul
2 comments
Read more