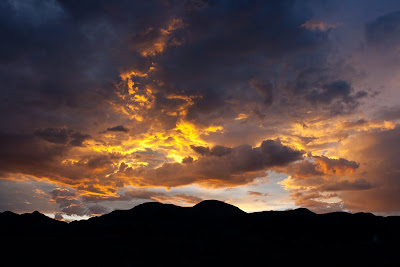 Sorry for the long lapse between posts. I've found myself in a quiet phase, perhaps better described as a listening phase. Although not listening in the way you would think. Not making a conscious effort to listen more to others, or to seek out more wisdom. I guess you would say I've been tuning more into the rumblings within--underlying layers of discord that feel familiar to my being, but seem to be rising enough to the surface, that I've become aware of the discomfort they are causing.

Some of the rumblings have been related to childhood memories and beliefs. Some have been subtle discords with friends and family that I've continued to carry with me, despite all my work in becoming clearer in relationships.

So much of the past few years has been about clearing out useless beliefs that I've held only out of fear, and so it seems now I've been dislodging some of the bigger boulders, chunks of myself ready for me to finally look at, and send tumbling off of me, significantly lightening the load.

So, it has been quiet, but not in the way you would think.

My desire to cut through the bullshit has given me a voice I've never had before. It has given me a courage to put a voice to striations in my being that are no longer of service to me and ready to be released.

It has given me the courage to tell others that I can't join them in their same old sad and painful stories.

And I am learning that what I once thought was compassion, was really self-sacrifice, and that it did nothing for me or for anyone.

Honoring what is coming up in me, honoring the little voice that I have, is loving to me, and to others. It gives myself and them access to all of us. It builds trust instead of suspicion.

I am learning that even if my actions appear messy, aggressive, iron-fisted, inappropriate, that these rules of judgement were never mine. So, I am listening to what is within, and giving voice to that which I know is holding me in a place of suffering-- ready to let it go, and all the patterns that come with it-- and I am watching the results: that truth is life giving, and life affirming. That staying with the pursuit of truth with another unleashes a power of love that far supersedes any idea of love we may hold in the ordinary sense of the word.

I'm learning that acting from a truthful place brings clarity, which allows more space for love.

Acting from an authentic place gives souls of all ages the courage to share what is happening inside of them only to find themselves reflected in another. Authenticity brings trust. Authenticity brings release. Authenticity brings vitality and joie de vivre, and opens up all relationships for growth and healing--and expansion. Why is this important? Because it feels good, and feeling good supports thriving.

I'm learning that there is a protective mechanism to telling the truth, and to living authentically. Intuition is at work, and sometimes you have to see things through, but in the end, there is a certain resolution, even if it is just within you-- and it comes from the feeling of freedom that you were able to act, instead of having to continually shut yourself down and suppress and feel ashamed of what you feel.

Some of the things that I have brought up with people could have left them never speaking to me again, and cursing my existence. Yet, those I've had the honor of reaching from such a place of honesty from my heart, have somehow responded in the end with a new love. I can only believe that it is because they are at a place where they desire to, or are accessing the same place within them, and are also beginning to not feel threatened at their core of who they are.

My heart's desire is to see myself clearly, in all the shades of dark and light. I notice others around me wishing the same. This opens up the possibility for deeply significant relationships--where beyond the veil of fear of one another, there is access to a stable love.

As I let go of patterns in myself, one of which has been to suppress my voice out of fear, I see the fog lifting around me. And I can ask for more, because I can see the possibility, right there in front of me--and it was always there, waiting for me to just reach out and take it. And I realize I have so much more to give, and giving fills me up, and receiving, whether by myself or by others becomes so much more powerful and meaningful, and spot on.