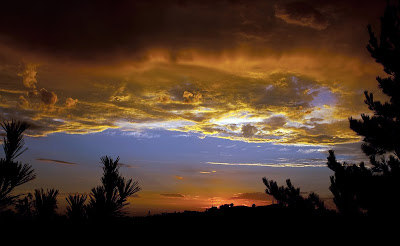 I've been feeling so open and vulnerable to life, so ready to sit with the darkness here, the disease, the discord--close my eyes, and let it swirl around me, no more fear, or at least the willingness to open to the fear, to not run from it. In this practice there is increased acceptance of all of it, and the stability that comes from being able to face the darkness, by challenging all the while, that you actually have any understanding of what anything is, what anything really means.

What this looks like, is moving so slowly. Taking deliberate steps and letting your feet fully flatten out onto the ground, keeping your breath deep, relaxing into the moment, before there is ever any reaction or thought pattern that is allowed to take over. You let goodness bubble up within you which keeps you from being constricted by your thoughts, feeling yourself open to the possibility that everything you've ever thought to matter was pointing you away from yourself, and that you are finally ready to head home.

It takes constant warming up to you again and again, until people are ready to join you in this place. But it is easy, because love is so easy to focus on, and it is the only thing that gives so much joy in the giving and the receiving. It is a self-reinforcing process.

And you see over and over how the only choice really is love in every situation, at every turn. Although, at first, it is a conscious decision that you must make over and over again. Yet, the decision to love is always easy when you no longer believe in labels and neat little categories, or in any absolutes. And the reflex to push everyone away becomes the reflex to open and to join.

I notice that I can stay within the nightmares that would have woken me up in the night in a cold sweat, as deathly images become less fearful and more curious to me, often containing the surprise of rich insight. There is the promise that behind each fearful image is the truth that it is all just in costume, like the monster who is unveiled to reveal an unhappy traveler at the end of every Scooby Doo episode.

I remember as a child sitting with my grandmother, contemplating Satan, who had been pretty fleshed out for me in my religious upbringing. He was a fearful character. But oddly, I always felt more compassion for him, than a wish for his eradication, or for revenge. I remember asking my grandmother why we couldn't just talk to Satan and bring him back over to the 'good guys'. I was sure that all he needed was to be loved.

As a kid these feelings showed up in my compassion for the villains in stories, and it was rare that anyone ever shared my point of view. But nonetheless, my heart's desire was always, that in the end, the villain be brought into the fold. I could see him too clearly, and knew that his actions were his dysfunctional attempt of seeking for love and acceptance, but that he didn't know how or where to look.

My ideas about rescuing Satan gave my grandmother a good laugh. She was touched by my words, but knew that there were just some things you couldn't make right.

More and more I circle back to those thoughts that I had as a child, and the wisdom contained within the heart's desire of an unjaded child, sure that we could make everything right by extending a hand of love.

As I shed the learning of this world, and return to the heart, and see how the beliefs imparted to me have been built on a foundation of fearful thinking, mostly out of a natural desire to protect those we love, I realize more and more that they are fluid thoughts and can change in intensity, allowing the spaces for love. I realize that there is no one who is not worthy of my opening to them and to who they are. There is no one that I can't see with all of their intricate patterning that has made them who they are. It may not take my pain away if they have done something very awful, but there is some space there to experience something that transcends face-value thinking.

If I could sit with 'Satan', I would move slowly, full footsteps, noticing active parts in me wanting to flee, wanting to judge. But I would have to challenge those thoughts. I would open my heart a little, and a little more. I would just rest in a place of nothingness which would make neither of us real, which would do away with any opposing entities. I would focus on finding clear and open perception, for him to know that everything we think about the other, who we are, or what we have done, what fears we think we can't escape--that it can all be questioned.

I wouldn't expect him to join me there. I'd just hold that space, because nothing else would feel good.

My eyes would see nothing but a form in him that is tired, close to collapsing, a heart tired of warring, but sure that it is the only way.

I would tell him there is the possibility of letting it all fall away. That there is another space he could try on for size.

If he decided to let it all go, we would watch it flow like lava out of him and marvel at what is left, and what has been created by letting it all just flow-- new and beautiful landscapes, fertile grounds for creation. Perhaps he would feel a lightness and a tenderness, that all the striving, all that fighting was no longer needed. It was so easy, when he just made the choice to stop the insanity and let go.

And this would be his first glimpse of a place worth returning to, and of the truth that the release of his tired perception was the opening, and that all of his fighting to belong, was in vain, and no longer needed. That there is nothing he need to do, no need to direct--that the ratio of his struggling to his letting go-- in other words, the parts of him with and without any resistance to what is, were always moving him to this place where he could experience peace--that it was through the contrast he would find the road to peace.

Then he would discover little by little how his ability to create was directly correlated with his level of faith in possibility.