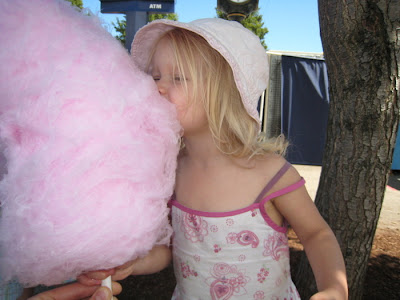 There just is no escaping the duality of our minds. We can't help but exist with two opposing forces built right in, one that sees beauty, light and hope, one that sees darkness, pain and destruction. It is all about where we choose to focus. I see that.

This was very apparent to me at the county fair. My kids were so excited about going. I was mostly excited about taking them. But I couldn't help feel a sense of imploding as I was forced to part with twenty after twenty-dollar bill, as I became ruled by stress, fearful of losing my kids in the crowd, as the day wore on and my feet began to hurt, as the frenetic energy and sheer force of noise left me full of holes, life-force weeping out--not to mention an extra spike in blood pressure at one daughter screaming her head off, the other disappearing, on our bike rides to and from the fair.

All the live long day I paused to survey my emotional responses and to shift them. I thought of Charlotte's web and Wilbur at the fair--to no avail. Eventually I just had to allow all that was surfacing as feelings of lack, fear, stress, dread, frustration, judgement and boredom.

So, what began as the possibility of fun with my girls began to feel like a nightmare--I think it was somewhere between the $3 cotton candy and the Mardis Gras themed fun house, where I was close to praying several times that my children would actually exit--feeling it too much to spend a recurrent $4 to go through it with them.

I began to see the fair as a very obvious manifestation of the ego, and I was surprised at how difficult it was to be there with its blaring, and oh so obnoxious noise--to find so many people who seemed to genuinely be enjoying what I wanted to escape. For a moment, it was as if I heard sinister laughing, as if a terrible God(dess) had lifted up the world and shaken all the madness to one side and then dropped it onto the county fairgrounds.

I had no choice but to be with it. There was no escape (until the ride bracelets were paid for in rides!)

The duality exists always, all ways.

And you know what? I just did the best I could. My expression might have appeared more pained than happy-but that was just my a plea for love, to be taken care of, for quiet, for tranquility, for sanity. I could forgive myself for wanting to crawl back into the womb.

And the biggest release? When I allowed myself not to love the fair.

Then I felt the love creep in, and not until then. Not a perfect love, not a beloved love--but there was some acceptance. There was some ability then, to focus on what little beauty I could see--even if it was just that I hadn't keeled over.

By contrast, the less than desirable experience did make the only one redeeming moment, an excursion with two little five-year-olds on the Ferris Wheel, a truly magical moment.

And then there was the fact that life just felt a little easier afterwards. Quiet felt quieter, and just about everything saner. I welcomed returning to a more balanced sense of everyday duality, and felt slightly more ease in the acceptance of it.