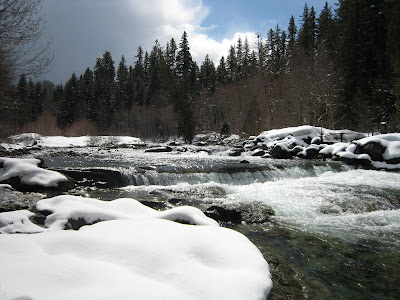 What has been foremost in my thoughts is the beauty of the fact that even when we don't feel at all connected to Source, when our inspiration isn't flowing, when our bodies are suffering, or when we just don't feel the measure of bliss we would like, if we just pay attention, we can see that it is our minds that have shifted out of the connection, but not the other way around. Source is always there, if only you are willing to see it. I am choosing to see it more often, in the moment when I would have ignored it to wallow in my suffering.

Monday afternoon I was having an energy crisis in my body. My kids were very demanding and fighting, and I just wanted peace and quiet. My kids were tired and thus, being very dramatic and tattling on each other constantly. Every time they complained, I could feel the energy in my body ripped out of me, slowly depleting to nothing--less than nothing. I tried to breathe through it, but by the end of the afternoon, I was extinguished--a pathetic shadow of myself.

I literally thought I was going to die, and despite the apparent beauty of my life, I might have chosen death in that moment, just to release the pain. I felt like I was shriveling and wilting into nothing. The energy was so heavy, it was suffocating. The only thing I thought I could do was crawl on the couch and flip the tv on for the kids, and try to have a power nap while my kids were quiet. However, they didn't want to watch tv!

Barely holding back the tears, but not my dramatic words of woe, I crashed on the couch, barely able to push the buttons on the remote to flip the channels. Still nothing they wanted to see. We only have 3 channels, and they are all PBS, and so, there wasn't much hope--or was there!!?

So, I turn the channel, and I see this serene image of flowing water and placid rocks, and a man standing their moving his body. Was this yoga? I wasn't sure, so, I kept watching. It didn't look like the uninspiring exercise segments that I had stumbled across in the past on these public stations. No, there was something appealing, something that made me pay attention. And the first thing out of his mouth was about how moving the body in these flowing motions shifted the heavy energy through, healed the body and left if feeling flowing and energized.

Some deeper commitment to peace helped me to stand up and start moving with him. Turns out it was Qi Gong, a sort of practice like Tai Chi, that moves the energy around the body, energizes the body by doing flowing movements with the body, as though you were running your fingers through the surface of water.

For maybe ten to fifteen minutes, I breathed and moved my body with this man, while my daughters were jumping around the furniture. I stood rooted in a standing position, in my regular clothes, with little more effort than lifting my arms and moving them around me. It was the easiest thing I'd ever done. I needed easy. I wouldn't have been open to some of the more difficult moving in yoga, although, I am sure that would have been helpful.

Very quickly, I began to feel all of the energy shifting around me as I focused on the movements and the breathing. I began to feel grounded in the breath, and the heaviness started lifting. All of my senses were filled by the beautiful scenery behind him on the screen, the tranquil music, and the coaxing words and soft voice of this man.

My daughters could feel the shift too, as they got their yoga clothes on, and joined me. Suddenly, there was relief for all of us. There were smiles! I went from feeling like I was surely dying, to feeling a certain vitality and energy, which allowed me to find perspective, and to bring myself back to feeling connected, appreciative and loving. I was back in the present and able to see what a gift it had been to turn on that show just at the right time.

I also see what a gift it was for me to recognize what was put before me as a gift, enough to muster all of my strength to PARTICIPATE! I am finding that I am energized by participating, and shifting into a more active phase, than just having to sleep it off. It was my choice to accept the gift, and to stand up and do the exercises--and I am encouraged by my commitment to find relief and to give myself what I need, when for so long I would choose to be in a state of mental and physical anguish instead.

Thank you, Spirit, for helping me see the true gift that was before me, and thank you for my continued desire to show up for myself, and to give myself what I need, so that I may have all to give. Thank you for helping me to learn how important it is to feel integrated, body, mind and spirit, for this journey, and for showing me the way.