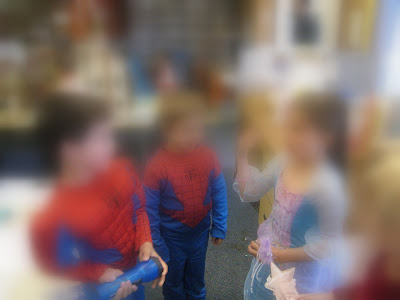 The other day my arm was sore, and I noticed that I had some kind of red bump. I guessed that it must be a spider bite, and the first thought that came to my mind, is cool, maybe it will give me super powers or something. That was the most random thought, but symbolic of how open I am becoming to the idea that our thoughts literally create reality, and that anything is possible.

After you have been examining the foundation of your mind for a while, it is as if you can see a blue print of it, and the less than perfect infrastructure of your conditioning; in essence, how you became you. If you walk around the perimeter, you can see how every brick was laid just a little unevenly, cracks in the mortar, loose siding, leaking gutters-- I was very surprised to find that no materials used to build my mind were anywhere near economical, not to mention environmentally friendly. Not one appliance was energy efficient!
No, it was more like, let's slap together a shoddy apartment with a horrible floor plan, so that I'm tripping and slamming into walls to move around in it, thin walls so that I may be driven crazy by the noisy neighbors blasting their heavy metal, who are always quick to bang something down hard on the ceiling above me when I'm playing Beethoven at a whisper; always things breaking down, peels immobilizing the garbage disposal, paint chipping in the bathrooms from lack of ventilation, and let's not even talk about the beasts that are eating away at the walls that I can't even see.
I've had to do some major renovating of my mind. And it is pleasant to finally see the improvements. It feels like work, but I am so energized by the outcome that I am seeing, that it is all worth it. And the funny thing is that after doing this a while, it is becoming an intuitive process. I don't have to search for cracks in the foundation anymore. I just have to sit back and wait for them to show themselves to me. All that exists within tells me which parts are sound, and which parts I need to completely gut and restore, and in what order.
But in the beginning, I had to commit to learning and to scouting out the right tools just to build my trust enough in my own handy work, that I could actually sleep without fear of it caving in on me in my sleep, or blowing the entire electrical system at the flick of a light switch. It has been slow-go at times, but there has always been help when I've needed it in some form or another. There have been the perfect how to books, the people who have said or written the perfect words to get me thinking, and perhaps most importantly, there has been the feeling that somewhere deep down I know what I am doing. I've just had to be able to access communication with that part of me without my distracting and destabilizing fear getting in the way.
And if it weren't for all the others around me knee-deep in renovations too, I'd be no where near seeing any progress. There have been those around me ready to risk letting go of their old paradigms to make room for the new. Those with faith enough to see the new technology through--friends who have been willing to wing it with me. Friends willing to stay up very late, even with kids to get to school in the morning, and to weigh in with their experience and understanding of the work. Together, we've moved leaps and bounds faster than we could have alone.
Don't worry, if there isn't anyone around you like this, just be open to everyone you meet. You might find them in surprising places. One of my most cherished partners in this process ends up being the one who gave birth to me, and yet another dear soul, I just met within that last five years, at a children's dance class. It took us a year of venting about the demands of parenting before we ever broached this topic. Yet, another I met randomly on a walk, and the list just keeps getting bigger and bigger as a beautiful web is woven...

But perhaps the biggest surprise for me has been how easy and fun it has all been. I admit, at first it was a little painful, but I realize now, that it was mostly because I wanted to mix the new with the old. I wanted to hang on to my old familiar thought patterns, because I couldn't muster the courage to imagine how new patterns might work better, or worse might erase who I am. But it didn't take long to find that the old ways were incompatible with the new technology. Once I realized this I was able to trust that change was good, and to bask in the light for longer and longer periods of time.
So, once I started opening up to new possibilities, I began to understand much about the way I worked, and having this knowledge about myself helped me to flow more with the remodel, and to resist it less. For instance, I understood that I was wrong about my memory. I actually had a great one--that is for all that I cared deeply about, and for that which truly interested me--not so good for that which was supposed to interest me. I was wrong about my energy levels too. I had all the energy I needed for anything that I was truly passionate about. It was when I acted out of fear, sacrifice, or compromising my own truths that I felt tired. (Okay, and maybe I was tired when I saw how much renovating my kids would probably need, when their tantrums looked strangely like mine, and, of course, when they got the gimmies).
So, what am I trying to say? Perhaps this: We don't need a spider bite to make us a super hero. We need only begin the inspection of our minds, to seek out the parts of it that might need to be rewired or updated, so that we might live a more peaceful existence, let the chi flow, and become aware of the unseen damage being done to the main structures, that unknowingly threatens the well-being of the entire home. I, myself, have found fear in the unlikeliest of places. I've literally had go into the crawl space of my mind with a screw driver to prod the support, to find the rot and damage that fear has caused. I couldn't believe some of the places I found it; places with water damage, that had attracted the pests, and was eaten to fine saw dust. I'd been so sure everything was water tight!
Ahhhh, it feels good to rebuild, and to return to a state of sanity and clarity, and there is no place to live in that is more powerful, and that feels more authentic. If you want a place to start, like any good super hero will tell you, honesty with your numero uno, meaning you, and only you, is the best place. It all begins here.