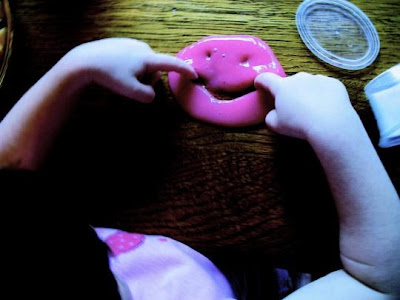 Most of the time, we feel that if we were to let go of control, our lives and the lives of those around us would go up in flames. What if we could just let go and trust that it was all happening as it should?

One night, meditating, I had the chance to experience this profound letting go and trust on a deeper level. While I was meditating I had some interesting images coming to me. I imagined myself floating on top of the Sea of Awareness, where exists all of the wisdom of the universe, from which all is manifest. I existed within this vastness as this kind of dense, formless, hot pink (I don't know why it appeared pink), rubbery, gook that had coagulated on the top of the water, and could not mix with with the Sea. I just floated on top and stayed together as painfully compact as I could in this dense, rubbery, waterproof form. I imagined the ocean that I floated upon as the release, the expansion, the gentle undulating that I was aware of around me, but with which I couldn't mix, out of fear of losing myself within the vastness of it.

It felt safer to keep together in a contracted mass, even with the awareness of a deep sense of calmness and expansiveness emanating from the sea. I was sure that I couldn't work through the fear, and was too afraid to accept the possibility that my contracted state wasn't me. It was too familiar. I was separate, at least that much I could understand.

As the meditation started encouraging my psyche to step into the Sea of Awareness, I opened ever so slightly, arguing that there was little risk in just nudging open my thoughts a bit during this mediation. I imagined tiny particles of myself starting break off of the pink gook, mixing little by little with the sea of awareness. The particles became blue and speedy as more and more of me began mixing and shooting out into the sea. It took a lot of focus to keep myself open and expanding, as I watched parts of myself disappearing into the vastness, exposed to all the supposed dangers contained within the depths of the ocean. But it was my desire to explore this feeling, because it was helping to release that tight pain in my chest; the feeling was much more peaceful than trying to stay together in a constricted from, unable to mix.

Little by little the contracted pain in my chest began to open up as more and more particles released from this gook. I imagined completely mixing with the water until I was one with the it. I had to keep reminding myself that I wouldn't lose myself if I released into the expansion, and so I yielded to the power of the sea, and then became part of it, feeling its vastness and power. Like water in the physical world, the Sea of Awareness effortlessly flowed through me, giving me life force, containing all of me within, and rocking me gently within its power.

The mediation talked about the universe carrying me, and suddenly there was the image of a giant form rising up over the land and cradling me in its massiveness, and carrying me extraordinary distances as I nuzzled into it, feeling the joy of not having to do anything. It carried me for quite a while under a golden sky until I released even further and didn't need it to carry me because I recognized it was illusion that I needed to be carried. No, I could fly.

I imagined that I was flying and soaring through this world not needing anyone or anything, knowing that all of my need was only illusion, that there was something outside of myself that I could find to save me. As long as I held onto that illusion, I would need someone outside of myself, and I would also return as pink formless gook coagulated over the Sea of Awareness, never mixing with it--as long as I couldn't see that it was all contained within me.

I have returned to the pink coagulated gook now and then since the meditation, but I have an awareness of where it is that I can return. It is reinforcing how important meditation and practice in expansion are for me to rewire my hardrive, and to fully embrace all the possibilities. It is always the perfect time in my life to embrace all of this in a profound way. I am so thankful for this imagery. I can work with it. I can see the contrast, and I can feel the ease into letting go.

I carry these images with me often, because they are so strongly connected to my physical experience of holding myself painfully in a state of wanting control and to control. I can access this imagery to feel the contrast of holding on or just letting myself be released from my own tight grip, in to the experience of something much more peaceful and all the more powerful.

So, as I go along, I know that it is much more painful to stay contracted as pink gook. I would much rather step into the powerful gentleness of the Sea of Awareness, in its magical and alive waters, and let it buoy me up, and naturally support and sustain me, and move me along in its knowing currents.